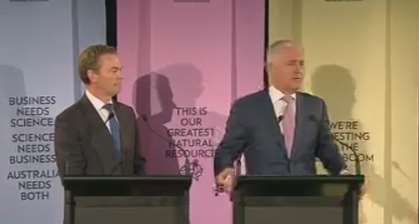 Prime Minister Malcolm Turnbull is confident at least some of the 24 economic “levers” the Government will push in its landmark $1.1 billion innovation statement will help Australia take advantage of the global “ideas boom”.

Launching the long-awaited National Innovation and Science Agenda (NISA) in Canberra, Turnbull and innovation Minister Christopher Pyne outlined a range of measures and investments “to incentivise innovation and entrepreneurship, reward risk-taking and promote maths, science and computing in schools”.

“There are many levers and measures we have to adopt,” Turnbull said.

“But if we want to enjoy the ideas boom and be an innovation nation then we have to make sure that we look very carefully at where there are weaknesses in the economy and market as it stands and where we can provide a nudge, an incentive, a bit of encouragement to make the system work better.”

Turnbull said he was “very confident” that at least some of the proposed measures would deliver for Australian innovation and the economy.

While acknowledging risks in building Australia as an “innovation nation”, Turnbull said there had to be more acceptance of risk-taking in Australian political and economic circles generally.

“We’ve got to be prepared to take risks,” he said.

“That is why one of the aspects of the political paradigm I’m seeking to change is the old politics where politicians felt they had to guarantee that every policy would work and had to sort of water everything down so there was no element of risk.

“Let me tell you – I’m not guaranteeing that all of these policies will be as successful as we hope they will be. Actually I’m very confident about it because we worked very hard on it.

“But if some of these policies are not as successful as we would like, we will change them, and we will learn from them.

In setting up grounds for policy pivots, Turnbull also indicated that NISA would be an evolving, ongoing piece of policy.

“This is not a one-off announcement,” Turnbull said.

“This is not the first and last word of this government on innovation. This is an absolutely critical theme of our administration to ensure that we are always driving innovation.

“There’s a lot of levers being pulled here and there will be more to come, I have no doubt.”

Supporting the Prime Minister, Christopher Pyne said that many of the levers did not have a large cost attached to them, but could provide a disproportionate benefit to the economy.

Some of these low-cost, high-value initiatives would be acted on sooner rather than later, he indicated. Other larger initiatives are not due until July 2016, or are pending legislative change.

Pyne said that Government ministers had been consulting on the proposed measures in their portfolios for the past “10 weeks or more”.

“It’s important for these consultations to continue right up to when the measures are implemented,” Pyne said.

It comes at a time when Australia’s innovation communities have been largely concentrated in the east coast cities of Sydney and Melbourne, but both have been slipping in their attractiveness compared to other cities on the world stage.

One reason for these slippages – according to a report released last week by Accenture, Nesta and Future Cities Catapult – is a perceived lack of vision on innovation.

The report listed Sydney and Melbourne as ‘builders’ – cities that were in the process of building innovation capability and an innovation agenda.

“Many of these cities have yet to lay out a clear and compelling vision with innovation at its core,” the report said.

“This is reflected in ad hoc instances of good practice which are not backed by a scalable portfolio of policy actions”.

Where the money comes from

The Government will be hoping it can change Australia’s perception on the international stage.

However, its next challenge will come when it reveals how it plans to fund the $1 billion-plus of measures that make up NISA.

Treasurer Scott Morrison told Radio 2GB that spending cuts would be used to pay for the measures, and that these would likely be unveiled in the mid-year economic and fiscal outlook (MYEFO), which should be released this month.