Kinect for the blind

Android could also be used in future. 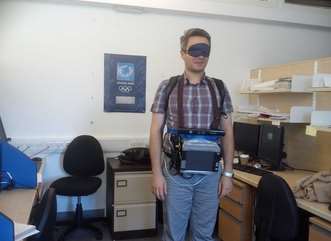 Testing of Kinect for the visually impaired.

A multinational team of researchers have created a low-cost prototype system using a Kinect sensor and laptop that could augment the white cane used by the blind or visually impaired.

The research, published in the Applied Bionics and Biomechanics journal, takes advantage of the infrared depth sensor and camera on a standard Kinect for Xbox 360.

“Though developed initially as a gaming input device for the Xbox 360, the Kinect has become popular among vision researchers because of both its low cost and the availability of software to acquire and work with data from it,” the researchers said.

While the sensors are powerful, they are not completely fit-for-purpose.

“One has to be careful while using Kinect to develop navigation systems as the sensor is not flawless and has some limitations,” the researchers said, noting depth could be incorrectly sensed in areas flooded by strong sunlight or where “irregular” surfaces existed.

“These inaccurate depth data reduce the accuracy of the system.”

According to a post on Microsoft’s Kinect blog, the researchers’ system is capable of checking for obstacles “that can completely block a person’s progress” – think walls – and “smaller ones, such as chairs, that can be avoided by changing direction".

“When an obstruction is detected, the system warns the user to either stop (so he doesn’t run into a wall) or move right or left (so she can navigate safely around a piece of furniture),” the company said.

The researchers conducted tests of their system using two subjects: one with normal vision who was blindfolded, and another subject who was visually impaired.

The system – while based on low-cost components – is “bulky and heavy”, the researchers acknowledged.

That meant keeping the trials short, but the researchers say they “envision a smaller, more portable production model” should the project get to that point.

Taking the next step is likely to involve testing other, more accurate depth sensor technology.

While Microsoft touted its Kinect for Xbox One as a potential solution, the researchers were looking more broadly afield.

“In the future, replacing [Kinect for Xbox 360] with some other depth sensor, such as a laser strippers, might yield more accurate responses,” the researchers said.

“However, the concept of combining vision with sensed imagery proves to work well.

“Android mobile phones are equipped with GPS, inertial sensor, and an RGB camera, a combination that may well be worth exploring for this kind of systems.”

Feedback from the visually impaired test subject also confirmed the system as a potential augmentation to the existing white cane, rather than a technological replacement.

“It was suggested by the blind user that if an automated navigation system can be combined with a white cane, one can have a safe and reliable mobility aid,” the researchers noted.

“This is mainly because surface terrain and low-level obstacles can be identified easily using a white cane, whereas an automated navigation system can help locate head-level obstacles and identify obstacles blocking one’s path.”

News of the Kinect trial comes in the same week that researchers from IBM and Carnegie Mellon University (CMU) showcased their own innovation for navigation by the visually impaired.

They created a pilot app called NavCog that can “inform blind people on the CMU campus about their surroundings by ‘whispering’ into their ears through earbuds or by creating vibrations on smartphones.”

“The app analyses signals from Bluetooth beacons located along walkways and from smartphone sensors to help enable users to move without human assistance, whether inside campus buildings or outdoors,” IBM said.

“Researchers are exploring additional capabilities for future versions of the app to detect who is approaching and what is their mood.”

IBM and CMU said the NavCog app would be made freely available on the App Store.