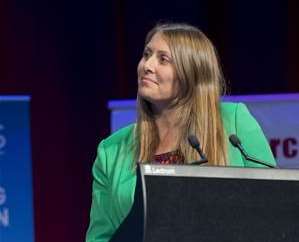 Wagering giant Tabcorp has described how disruption from international entrants and changing consumer preferences led the company to “raise [its] game in the digital space”.

Speaking at the ACS Reimagination conference in Sydney, Tabcorp’s portfolio management general manager Cordelia Kerr outlined the sources of digital disruption the company had faced and how it had successfully navigated them.

While the conversation around digital disruption really ramped up over the past two years, Tabcorp started to feel the effects much earlier.

Kerr said that the federal deregulation of the wagering market in 2008 opened Australia’s doors to “cashed-up international operators”.

“As the incoming competition became familiar with the Australian marketplace, they emerged into what we see today in the competitive online space,” she said.

Kerr said that many of the new entrants could already boast the delivery of “a fairly ubiquitous” user experience across wagering channels.

It helped them take advantage of “changing consumer preferences” in favour of online channels, she said.

“When your customer preferences are changing and your industry is being disrupted by international competition, it’s really time to recognise digital as part of your core business,” Kerr told the conference.

She said a proposal was put to Tabcorp’s board in 2011 to recognise the power of digital by creating an in-house capability to manage it.

“Traditionally we have relied on partners to deliver our digital product,” Kerr said, adding that it “led to somewhat of an inconsistent user experience across digital devices” and impacted the company’s ability to react quickly to change.

“The in-house team that we created with the backing of the CEO and the wider leadership and executive was really a cross-functional team.

“It pulled together user experience, product, devops, testing and QA, and the development capability [across the business].”

At the same time, the company put in place the “foundational assets” it believed would help it on its impending digital journey: “solid APIs, solid test harnesses, automation and processes”, backed by agile development methodologies.

Kerr said one of the key strategies Tabcorp employed when designing its digital experience was putting the customer at the centre and seeking feedback from them along the way.

She also said that “clear minimum viable products” were agreed with the business, allowing tangible outcomes to be delivered “very quickly”.

The first version of what is now tab.com.au took just eight weeks of daily releases to create – a major cultural change that put Tabcorp firmly on a path to more digital ‘wins’.

“We went from two releases a year to the ability to release daily,” Kerr said.

“We were first to market globally for logging onto your betting account with TouchID.

“And with the in-house built tab.com.au as our primary site, during the 2015 spring racing carnival we [saw] a 27 percent uplift in customer account openings on Melbourne Cup day alone. I’m pretty sure that’s a good result.

“If that’s not enough incentive, last financial year we had $3.4 billion of turnover through our digital channel, 64 percent of which was through mobile devices.