Uncanny Valley takes the top prize with 'Beautiful the World'. As the winners were announced, the Uncanny Valley team – video calling into the stream from a couch in Sydney – were clearly chuffed with the result.

“Thank you so much, we are honoured to win this AI song contest,” said Uncanny Valley’s head of music and innovation, Charlton Hill.

“Thank you to all the other entrants. What a great project and we look forward to collaborating.”

‘Beautiful the World’ is a response to this summer’s devastating bushfires and used an amalgamation of native animal sounds like koalas, kookaburras, and Tasmanian devils to build the winning song. 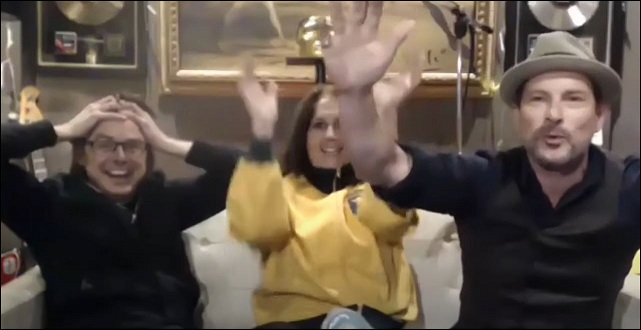 “We mashed [the animal sounds] all together and we played some melodies that were generated by the AI on what we like to call the Koala synth,” said Uncanny Valley head composer, Justin Shave.

"The fact that we were able to use technology to blend in the message of the devastation of the bushfires in Australia early this year, clearly struck a chord," said Uncanny Valley's innovation strategic partnership lead, Caroline Pegram.

Along with the AI generated melodies being played on a synth created with the sounds of Australian fauna, the lyrics of ‘Beautiful the World’ were generating using a modified version of Open AI’s GPT-2 natural language processing machine learning model which was trained on lyrics from previous Eurovision songs.

The AI-generated lyrics have a message of hope with its opening line “Flying in fear but love keeps on coming”.

References to dreams as being “vivid candles of hopes” in the bridge introduces “the power of fire” as “the music of the Earth”.

‘Beautiful the World’s chorus – a repetition of “welcome home” which Hill said was made using AI that matched “the syllabic use of words with [AI generated] melody” – has the catchy, head-nodding beats of a pop classic and a rich sonic texture.

And the winner of the first #AISongContest is The @_Uncanny_Valley team representing #Australia. Congratulations! Listen to their song on https://t.co/XhkDxTUcry

Held during Eurovision week, the AI Song Contest – while not an official Eurovision contest – will be the closest thing 2020 gets to having a Eurovision competition as the main contest was cancelled due to the coronavirus pandemic.

The team of judges, composed of AI experts Vincent Koops, Anna Huang, and Ed Newton-Rex, praised the contestants for their efforts creating music with AI.

“We were amazed by the teams’ wide range of innovative approaches to using AI in their creative process in creating AI Song Contest songs,” the panel said.

“Every song felt very personal in different ways, and this reflects how the artistic vision of each of the teams drove how they collaborated with AI.

“Composing a song with AI is hard, because not only do you have all the creative challenges that come with writing a song, but you also have to juggle with getting the machine learning right.”