There was no safety mechanism built in. 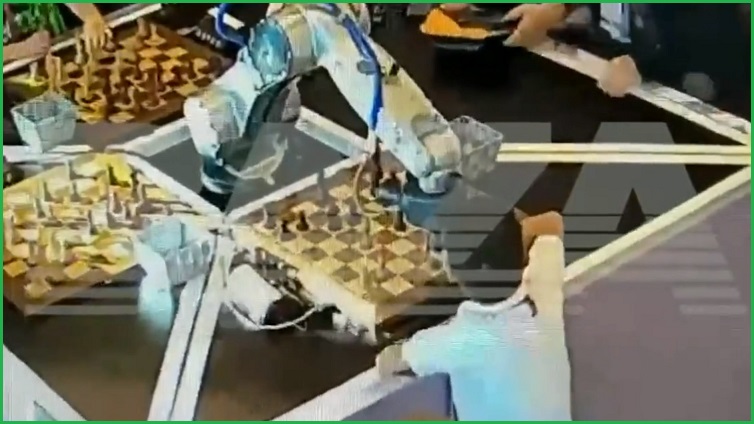 The robot grabbed a finger of its opponent. Image: Twitter

A chess-playing robot has broken the finger of a 7-year-old player in Russia.

Video footage of the incident, which happened last week at the Moscow Open, shows a robotic arm in a table surrounded by three chess boards which it can play on simultaneously.

After the robot takes one of the child’s pieces, the boy excitedly reaches over to make a move in response.

Suddenly, the robot’s mechanical grey arm reaches back down and clamps down on his finger.

The boy struggles, visibly distressed, as the robot’s minders are seen frantically pushing buttons on a nearby tablet in order to release him.

A chorus of adults rush in to help pry the boy’s fingers free. He is then ushered away from the table clutching his hurt hand.

“This, of course, is bad,” he said. “The robot was rented by us, it has been exhibited in many places, for a long time, with specialists.

“The child made a move and after that we need to give time for the robot to answer, but the boy hurried, [and] the robot grabbed him.”

Despite his bizarre chess-playing robot injury, the child – one of Moscow’s best young players – managed to finish the chess tournament wearing a cast.

His parents are considering legal options, according to TASS, though Lazarev maintains the children were informed of safety protocols and told to wait until the robot finished its moves before acting.

“The robot operators will have to think about strengthening protection so that this situation does not happen again,” he said.

Associate Professor Maria O’Sullivan from the Monash University law school said the incident, shared widely on social media, was a reminder that we need to be careful about how potentially dangerous technology is introduced into society.

“It’s worrying the robot didn’t appear to have a safety mechanism,” she told Information Age.

“Even rudimentary systems, ordinary machinery, have in-built safety mechanisms that sense when something is wrong so they shut down.”

O’Sullivan said we need to consider the ways to mitigate risks of technological harm when designing and implementing all sorts of systems – from chess-playing robots that could break a child’s finger, to driverless cars that might kill pedestrians.

“We need to think about the worst-case scenario and work risk-mitigation into design processes to ensure harm is minimised,” she said.

“There is an amount of uncertainty with technology, especially when it comes to so-called black box machine learning systems, and we need to be aware of that and keep up to date with what is happening, especially lawyers like myself.”

While it’s clear the robot didn't deliberately harm the boy, the violence with which it grabbed his finger is reminiscent of robots going wild in science fiction stories.

After all, artificial intelligence systems have come up with some surprising responses to losing at games.

Back in 2013, an AI that learned to play Tetris decided the best way not to lose when it was in an impossible position was to simply pause the game indefinitely.

A lifelong technophile and science fiction geek, Casey joined Information Age in 2019. With interests in AI, space travel, and post-humanism, Casey is always on the hunt for the overlap of science-fact and science-fiction.
Copyright © Information Age, ACS
Tags:
chess robot artificial intelligence ethics