DEC lead the minicomputer boom - until its spectacular fail. 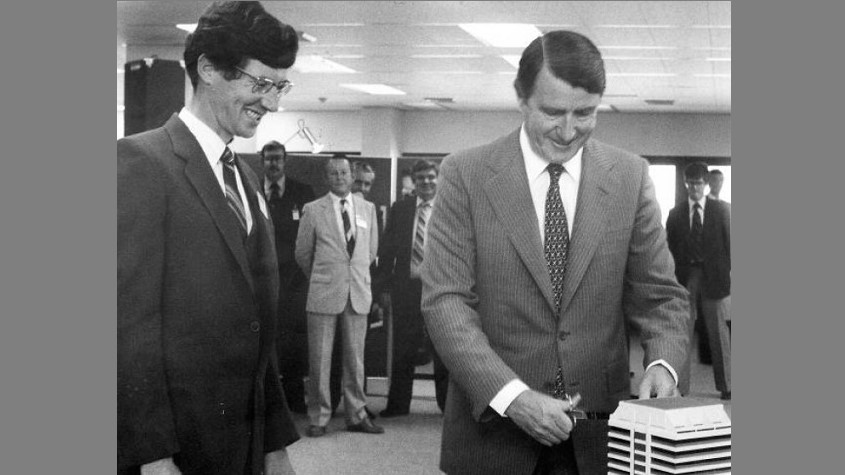 Minicomputers were introduced to the Australian market by Digital Equipment Corporation (DEC) in the 1960s (see Chapter 16). But it was in the 1970s that they really started to make an impact. The major minicomputer specialists were DEC, Data General, Datapoint, Hewlett-Packard, Prime, and Wang.

Many of the mainframe suppliers also supplied minicomputers, most notably IBM, which expanded its product range significantly during this time. The proliferation of minicomputers in Australia in the 1970s was phenomenal. The lower prices – and those prices kept dropping, even as performance improved massively – meant that many organisations that had not come close to considering a computer in the 1960s, installed machines in the 1970s.

In the 1970s, industry started to notice the new breed small computers, and DEC began selling to a number of commercial organisations in Australia: Australian Paper Mills, Servex, Kodak and others. By this stage, DEC had offices in Sydney, Melbourne, Brisbane, and Perth, and a man in Townsville to service the PDP-10 sold to James Cook University. DEC employees became known as ‘Digits’.

The company’s growth in Australia in the 1970s was driven by its continued ability to release new and more powerful machines, and to support them effectively. The PDP-8 had been introduced in 1965, and was the basis of DEC’s initial success in Australia.

The 16-bit PDP 11, released in 1970, was DEC’s most successful product to date. It was developed quickly as a response to Data General and other emerging minicomputer suppliers. It stayed in production into the 1990s and eventually sold 600,000 units worldwide, making it the most popular minicomputer in history.

At first, the PDP-11 had very little software. Australia made an important contribution in 1973 when local software company Computer Power developed a COBOL compiler, which was sold to DEC in Massachusetts. It was the first ANSI 1968 standard COBOL compiler to fit into a 64KB byte minicomputer, and was instrumental in Computer Power’s international success (see Chapter 31).

In 1972, DEC supplied seven PDP-11/20s to CSIRO to act as nodes on the CSIRONET network, connecting all mainland capitals and Rockhampton. Max Burnet, who had been with DEC Australia since 1967 when he started the Melbourne office, was appointed general manager at the end of 1975.

The PDP-11’s enormous success was repeated with the VAX range of computers, introduced by DEC in 1977. VAX, which stood for Virtual Address eXtension, was so named because it was a 32-bit extension of the PDP-11’s 16-bit architecture, and used a technique known as virtual memory to manage the increased addressable space, and an operating system called VMS (Virtual Memory System).

The first Australian VAX sale was to Mount Stromlo observatory near Canberra. Most of the early sales were to universities, but the machine became very popular in the commercial world. In 1980 alone, 70 VAX machines were sold in Australia, and by 1983 DEC was selling so much equipment in Australia that it had to charter an air freighter from the USA every three weeks. By 1984, 500 VAXes had been sold in Australia.

The VAX range remained DEC’s main product line for 20 years, with production not ceasing until 2000. The first VAX was the 11/780, and in 1984 the high-end VAX 8600 and low-end MicroVAX were released. DEC sold over 20 VAX 8600s in Australia, at around $1 million each, in the few months after its local availability.

In 1992, DEC released the Alpha range of 64 bit processors, but they never equalled the VAX in popularity. The Alpha used a DEC designed RISC (reduced instruction set computing) microprocessor, at a time when fierce rivals HP, Sun and IBM had released similar chips; DEC’s computers were no longer seen to have a technological advantage.

At the end of 1980, DEC Australia moved into new headquarters in a tower building above Chatswood station in Sydney’s northern suburbs. American Frank Wroe arrived from head office in Massachusetts in 1982 to become general manager, and Max Burnet moved into a kind of elder statesman role with responsibility for a number of special projects. He became DEC Australia’s corporate historian, and today owns one of the world’s largest private collections of DEC equipment.

Australia became one of the company’s most successful international operations. In 1989, founder Ken Olsen made his first trip to Australia, and in 1990 the first DECworld event in Australia was held, attended by over 4000 people. In the same year, DEC Australia moved to a new headquarters in the Sydney suburb of Rhodes. The company was at its peak.

Max Burnet explains what happened next:

“DECworld and the new Rhodes building represented the zenith of DEC in Australia. The company could do no wrong. VAX computers were selling like hot cakes, networking with Ethernet was a great success, order books were full, marketing meetings were held to plan when DEC would be bigger than IBM (2007 was predicted), the fast elegant Alpha chip was winning all the benchmarks, etcetera.

“So the bottom line was impacted by the cost of bureaucracy, and the word went out that head count had to be reduced. There was little attempt to keep the profitable bits. Just worldwide edicts to cut staff by 7 percent. The initial retrenchment packages were generous and Digits put their hands up for them.

“But no one bothered about the health of those that remained. They had to do the work of those that had left, as well as their own. They were left wondering if they would be next. A vicious cycle of resentment and negativity set in. So, the next few years became death by a thousand cuts.”

In 1998 DEC was acquired by Compaq, a major US microcomputer supplier, but a much smaller company in Australia. Compaq’s Australian headquarters were moved to the DEC building in Rhodes. Burnet and many others left the company, refusing to be ‘Compaqted’.

Then in 2001, Compaq was in turn acquired by Hewlett-Packard, which was to surpass IBM to become the largest computer company in the world (before Apple’s renaissance). HP was also smaller than the combined DEC/Compaq operation in Australia, and it too used the Rhodes building as its new Australian headquarters, relocating from Melbourne.