Why Naomi Simson is betting on AI

Experience-giving pioneer RedBalloon was never intended as an IT service delivery company, but its newly formed parent group will be just that, after it picked up exclusive distribution rights to an artificial intelligence (AI) marketing platform that blew away expectations literally overnight.

That platform was Albert, developed by US and Israel-based firm Albert Technologies and applied with great success at firms like Harley Davidson, Cosabella and Made.com. Fruit giant Dole, for one, used Albert to ready 5.7 million new potential customers and drive an 87 percent increase in sales.

Those results convinced RedBalloon co-founder Naomi Simson to look into the potential of AI to improve marketing for the company. Customer acquisition costs – which used to sit around 5 cents when Simson was “mucking around with” Google AdWords years ago – had shot up to as much as $50 due to the cost and varying success rates of different forms of creative, engaging content.

“That’s unsustainable for any business,” Simson explains, “and you have to look at different ways of attracting customers. We’ve tried lots of things, but without an effective way of approaching all digital marketing, there was just so much waste. You would do one thing one day and it would work, and then it wouldn’t work the next. It’s never set and forget.”

Having heard about Albert from colleagues, Simson sourced the platform and in June linked it to the company’s customer relationship management system. The results were astounding: “Literally as soon as we plugged it in, on the day that it launched, it produced 6400 pieces of new creative for us,” she says. “Even with a team of 10 people that would take a long time.” 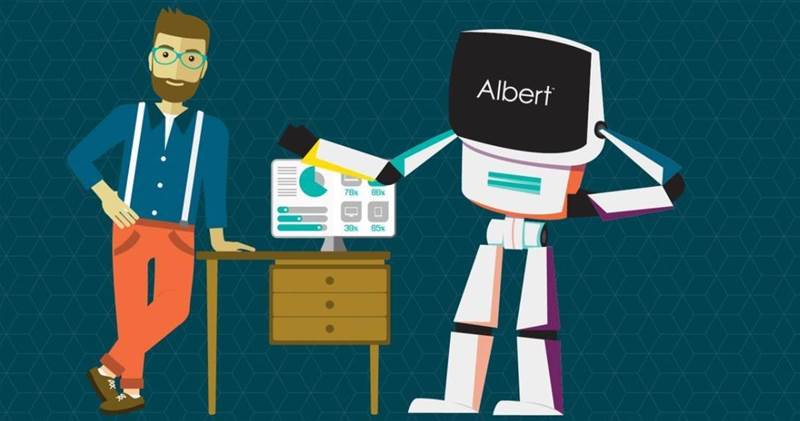 By analysing RedBalloon’s customer interactions and transaction history all the way back to its first AdWords campaigns in 2003, Albert’s AI engine was able to quickly learn which campaigns had been successful and which had not. It would then extrapolate that to develop new models tailored to particular customers, continually reviewing its learnings and tweaking its recommendations for the maximum chance of delivering against key performance indicators.

With “absolute focus and energy” the RedBalloon team had previously succeeded in cutting its customer acquisition costs to $28, Simson said. But within the first month using the platform, Albert reduced this to just $11 per customer, cutting the firm’s overall spend by 25 percent. By the 60-day mark, Simson said, “it had paid for itself 10 times over – and with it typically taking 90 days to get its rhythm, I’m excited to see what it can do.”

Simson is so excited, in fact, that the newly-launched Big Red Group (BRG) – an umbrella organisation that manages Red Balloon as well as Redii.com, Wrapped.com, and The Huddle – has secured exclusive distribution rights for Albert in Australia and New Zealand. The company is building up its roster of skilled staff to support the new line of business, and Simson says many have jumped at the “massive career opportunity” to work hands-on with AI in real-world deployments.

They’re not the only ones. 'Productised' AI is rapidly turning established industries on their heads by using intelligent machine-learning algorithms to analyse massive data sets – the bigger the better – and derive trends that may point to new opportunities.

Apple’s Siri may be the best-known AI engine, but the family is rapidly filling out as Microsoft’s Cortana, Amazon’s Alexa, and Google Home lead AI into the home. Yet analysts recognise even bigger rewards for applying AI into enterprises where massive efficiencies are just waiting to be identified.

IBM’s Watson, an early contender, has been moved to the cloud and is already providing new insights at the likes of Woodside Energy, Chevron, healthcare provider Icon Group, and other organisations. Oracle, Amazon Web Services, Microsoft Azure, SalesForce.com, and a host of other enterprise providers have their own AI plays in action. Other companies are targeting vertical markets, such the mobile operator-focused Loop service from Nuance, which has also supplied its Nina Virtual Assistant to IP Australia for AI-powered online customer support.

Little wonder analyst firm Gartner chose AI as the most disruptive technology trend of 2017. Yet even as enterprise AI tools provide unprecedented insight into marketing, HR, information security, maintenance and other activities, some are warning that massive automation will force companies to redirect employees that may find they just can’t keep up. Services firm Wipro, for one, expects its Holmes AI system will do the work of 3000 engineers.

A 2016 CSIRO report suggested that 44 percent of Australian jobs are “potentially at high risk of computerisation and automation”, while a recent study into the future of Australia’s workforce found 65 percent of workers believe new and emerging technologies are affecting the way their work is defined and accomplished.

Launching its latest salary guide, recruitment firm Hays believes broader AI adoption will drive a surge in demand for specialised contractors, who will help the business focus on higher-level goals and greater value-add while allowing Albert and his brethren to take over high-volume, repetitive tasks.

“You still need the makers, copywriters, photographers, and all of the creative folk,” Simson says. “But instead of just having doers, you have a conductor to make sure all of those elements still line up. You often see departments working in isolation but Albert is working 24x7. You feed him data and he just runs with it.”

David Braue
David Braue is an award-winning technology journalist who has covered Australia’s technology industry since 1995. A lifelong technophile, he has written and edited content for a broad range of audiences across myriad topics, with a particular focus on the intersection of technological innovation and business transformation.
Copyright © Information Age, ACS
Tags:
redballoon naomi simson ai artificial intelligence albert